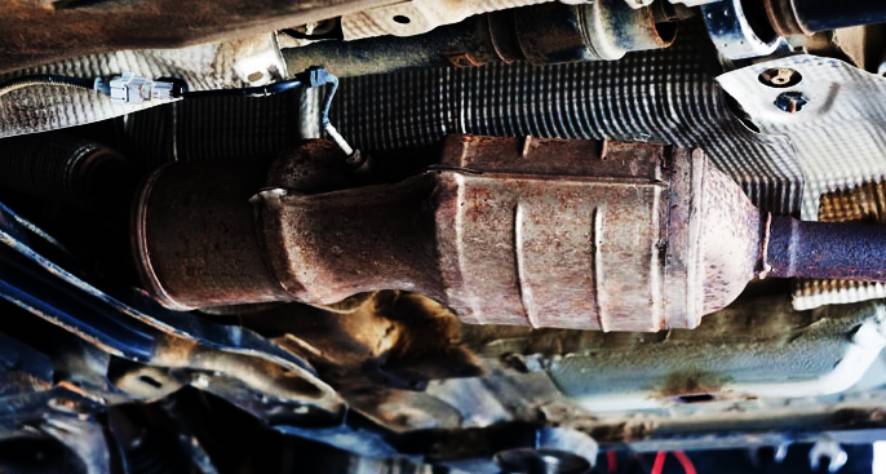 A bad catalytic converter can be the cause of many issues in low and high-powered vehicles. These issues are most common in older vehicles, especially in diesel engine cars which run on a richer air-to-fuel mixture.

Diagnosing and preventing the clogging of a catalytic converter can be the difference between needing to replace a $900, and not needed to spend that money.

To help car enthusiasts and regular drivers in the US, the USTrans.com team decided to tackle one of the most important questions regarding your car – what are the signs of a bad catalytic converter?

A bit About the History of the Catalytic Converter

The first commercially produced “cat” was designed and refined by the French mechanical engineer Eugene Houdry. The very first converters to ever exist were simple, cylinder-shaped inert clay infused pipes which used platinum, palladium and other noble metals as means of extracting harmful gasses from the exhaust of internal combustion engines.

The very fits wide-spread application of catalytic converters in the US was in smokestack tailpipes on warehouse forklifts which generally ran on low octane-level, leaded fuel.

Modern catalytic converters can be separated into three main types:

All three types have their pros and cons, with the three-way catalyst being by far the most restrictive on gas airflow, being the cause for the highest loss of gas speed and wheel horsepower reduction.

It is also the most efficient one, making it the preferred catalytic converter of large US-based manufacturers like Ford, Chevy and Chrysler.

What Does the Catalytic Converter do in a Motor Vehicle

It is usually placed right after the downpipes but not directly connected to the engine as hot exhausts will be more difficult to convert to harmless gasses. Due to the weight of the converters, they are often placed somewhere in the front half of the vehicles.

Powerful makes and models like some Jaguars have two cats, whereas smaller, less powerful vehicles have only one. Replacing them can be quite expensive, unless you got universal parts from a discount exhaust shop.

On to the main question “What does a catalyst do?”. The role of the cat is to convert harmful gases into harmless ones. The gases it must convert depend on the fuel used to power the engine, however, most commonly they are:

Depending on the type of converter your vehicle is equipped with, there might be several different types of chemical reactions happening underneath your feet.

For instance, an oxidation catalyst will use an oxidation process to turn carbon monoxide and nitrogen oxide into carbon dioxide and water.

The structure of a cat is generally honeycomb shaped, we say “generally” because there are different configurations. The most effective geometry so far has been found to be the honeycomb because it can gather more metals and ceramic into a smaller space.

The ceramic used in car manufacturing is inert, meaning it does not react with the gasses but rather acts as a holding cell for the reactive metals. Most modern cats are made out of ceramic coated in:

Upon contact with these metals, the hot exhaust gasses change their molecular structure, reacting with the platinum cations, taking from the metals, leaving a small trace behind into the honeycomb shape of the cat.

The end results are far cleaner exhaust gases, but restricted exhaust speed, causing the car to lose some of its horsepower potential.

Race track vehicles like vehicles used in the IndyCar 500, which are not meant for daily driving, don’t have catalytic converters – they are purely performance vehicles which use the full potential of their engines.

Do you need a catalytic converter in your daily car? Yes, most definitely. Even in states without any annual exhaust emissions tests, catalytic converters are absolutely mandatory because it’s a federal law meaning it applies to every state, regardless of particular legislature.

DID YOU KNOW: Your catalytic converter is under Federal Emissions Warranty, if clogged it can be replaced for free if: Your vehicle is 7 years or newer; it’s under 70 000 miles.

What are Signs you Have a Clogged Catalytic Converter

One of the sure symptoms of a clogged catalytic converter is your vehicle losing power and being less responsive.

Due to the restricted airflow from the converter already existing, your vehicle will have a harder time exhausting its gasses, reducing the effectiveness of the airflow manifold which takes gasses away from the engine to complete the burning cycle required for power production.

Depending on the type of power transfer to the wheels and the crank shaft (V-tec or otherwise), you will feel a reduction in power responsiveness on the lower revs and gears.

This problem will be felt more once the engine is hot, exhausting gasses will become more difficult and the engine will have a harder time making room for the newly created gasses. There are also these types of issues, like:

These issues can also be caused by many other factors, some one of the surest ways to check and see if you are driving with a bad catalytic converter is to have its codes scanned.

You can use consumer grade code scanners, or you can take your car to a professional mechanic – if you get the codes P0420 or P0430 this means your catalytic converter is working below the efficiency threshold, sometimes only by 5%.

How to Unclog a Catalytic Converter – is There a Way

If you are not in the “know” then you probably aren’t aware that catalytic converters are quite expensive with prices ranging from $800 up to $1200 for a brand new one. In vehicles that have more than one, this can be quite an expensive purchase.

In case you have any of the aforementioned bad catalytic converter symptoms, it’s best to check with a mechanic you trust or do the following (only for experienced mechanics):

If there’s more than 3-4 Psi difference between the exhaust flow that means your cat is in need of a change, or perhaps you can just wash it. Does washing a cat work to unclog it? You can sure try and see if you can get its efficiency working.

Depending on the quality of the fuel you are using, your cat can clog quite quickly, so one way to fix that issue, supposedly, is to clean it. To clean your cat, you are going to need:

If you are wondering how to fix catalytic converter without replacing, the second option is to take the cat off. This can be such a hassle that most people would prefer to spend the $1000 rather than take an almost welded cat off.

If don’t really want to spend so much money, you can try a little cleaning. After removing, you need to:

If this does not work, you can always find a used auto-parts store and get a good deal on a used cat, or you can go for OEM parts and just bite the bullet.

A budget cat idea that might save you a buck involve looking for wrecked vehicles matching the make and model of your car – the less mileage these cars have the better.

If you want to learn more about cars, or are interested in transporting your vehicle, getting your car transported across the country or any other car related service – you can check in with USTrans.com.